As a mixed-race man born in Peru, Saint Martin de Porres is a representative of three continents; his mother was of African descent, his father was from Spain, and he himself was born in the New World. A highly esteemed healer and friend to all living creatures, Martin is one of the most popular saints in Latin America.

Born on the 9th of December 1579 in Lima, Peru, Martin was the illegitimate child of Don Juan de Porres, a Spanish nobleman and Ana Velázquez a freed black woman from Panama, whose family had been African slaves. Dark complected like his mother, his father did not legally recognize him until he was a teenager. He and his sister Juana shared a poor and neglected childhood, and at twelve, his father apprenticed him to a barber-surgeon so that he might have a trade. In those days, besides cutting hair, barber-surgeons performed surgeries, made medicines, and were much solicited for cures of every ailment.

Deeply religious, it was Martin’s habit to pray as he mixed his herbal healing potions, and they said that he healed as many with his prayers as with his herbs. He met with outstanding success in his new profession, but in his desire to serve God with childlike humility, he routinely gave all his money to the poor. By the age of fifteen, he wanted to become a foreign missionary and entered the Dominican Rosary Convent as a Third Order Tertiary or Lay Brother. Church and Convent of Santo Domingo

Historical Churches & Convents
The Church and Convent of Santo Domingo date back to the end of the 16th century. The church is famous in Lima for being the only one with a "real"...

He performed the humblest house chores, all the while meditating on the Passion of Christ, a subject of much fascination for him. As a farm laborer and gardener, Martin developed a deep harmony to nature. Animals flocked to him and he showed them a respect and kindness that bewildered his European brothers. Since most of the Dominican priests were from Spain, they had little experience with people from other cultures. Believing in the superiority of their own civilization, they were basically in the New World to minister to the newly arrived soldiers and merchants from their mother country. During a plague, Martin quietly taught them the true meaning of Christian charity when he volunteered to help in the infirmary.

He ceaselessly nursed African slaves, the native population, and Spanish nobility with the same grace and ardor. Because of the spectacular success of his treatments, they installed him as head of the infirmary, a job he claimed to be unworthy of. One day, when the infirmary was overcrowded with the sick, Martin was told not to admit anyone else. Yet when he found an Indian bleeding to death from a knife wound, he immediately took the man in and treated him. Martin’s Superior reprimanded him for this open disobedience of his order, and Martin replied, “Forgive my error, and please instruct me, for I did not know that the precept of obedience took precedence over that of charity.”

From then on, they gave Martin the liberty to follow his own decisions on treating patients. Martin proved to add such a valuable contribution to his religious community that, at the insistence of his prior, racial stipulations were abolished so that they could make him a fully professed brother in the Dominican Order.

“Compassion, my dear brother, is preferable to cleanliness. Reflect that with a little soap I can easily clean my bedcovers, but even with a torrent of tears, I would never wash from my soul the stain that my harshness toward the unfortunate would create.” - San Martin de Porres

As a priest, Martin put his missionary instincts to work, traveling through the city to tend to the sick of Lima. He was particularly devoted to the poor, and the racially oppressed. Having great practical instincts, he opened hospitals and orphanages, raising money from the newly wealthy Spanish elite. Because of his ability to budget and allocate the charitable donations he was given, they promoted Martin to almoner (medical social worker) of the monastery when it was struggling for financial support.

He amassed steady donations totaling two thousand dollars per week, an astounding sum at that time, to cover the monastery’s operating expenses and to provide food for the hungry. Every day at noon, he had the gates of the monastery opened so that he could distribute food to anyone who needed it. Regardless of the number of people waiting, no one was ever turned away.

His charity extended to the animal kingdom, and he inaugurated the first shelter for stray cats and dogs. It was his sincere belief that God equally loved all creatures, so all were deserving of his compassion and servitude - even those of the lowliest order. An example of this belief was clear when the monastery became overrun by mice and rats.

The prior ordered poison to be set out to end the infestation. Martin went out to the garden and softly called the rodents out of their hiding places. He reprimanded them for invading the monastery and promised to feed them every day out in the garden if they would stay away from the building. Both sides kept to this agreement, and they still appeal to Saint Martin today to prevent infestations of these pests.

If Martin’s great love for animals seemed inexplicable to his Spanish colleagues, they grew to accept it as just another proof of his sanctity. He ceaselessly prayed and enjoyed humble tasks because they enabled him to keep his silent union with God. Martin’s wisdom seemed to come from a source deep within him and was much sought after. Archbishops and students of religion came to him for spiritual guidance and direction. This was no doubt a difficult role for him, since he preferred a life of humility and anonymity.

But with such mystical gifts, he could not remain overlooked. In the chapel, he would go so deeply into meditation that he would levitate off the ground. His intuitive abilities enabled him to read minds and slip through locked doors. Like other mystical saints, he was gifted with bilocation (the ability to be in two places at once), transcending all laws of time and space. Spanish traders who knew him from Lima reported meeting him in the Philippines and Japan.

“A torrent of tears could never wash from my soul the stain of neglect toward the homeless.” – San Martin de Porres

An African slave whom Martin treated in Peru told Martin that he was extremely happy to see him again and asked how his voyage was. When he was told by another brother that Martin had never left Lima in his life, the slave vehemently disagreed. He insisted Martin had come to the slaves in the hull of the boats as they were transported in irons, offering consolation and comfort.

By the time of his death from a high fever, Martin de Porres was a great celebrity in Lima. He died on the 3rd of November 1639 as a very close friend of both San Juan Macías (Saint Juan Macías), a fellow Dominican lay brother, and Santa Rosa de Lima (Saint Rose of Lima), another lay Dominican. Peruvian Personalities & Founders
Santa Rosa de Lima is the patroness of Lima, Peru, the Americas and the Philippines. Already as a child Rosa was possessed with the veneration of r...

The poor considered him a folk hero and called him the Father of Charity, and the upper classes honored him for his good works and ability as a healer. His funeral was open to the entire city and was attended by noblemen, ex-slaves, and religious authorities whom he had served and advised with equal respect in life. After his death, Martin maintained the love of the Peruvian people, and his cult is particularly strong in South America.

He was beatified in 1837 by Pope Gregory XVI and canonized in May 1962 - the first black saint in the Americas - when Pope John XXIII named him the patron saint of universal brotherhood. He soon also became the patron saint of interracial relations, social justice, those of mixed race, public education, and animal shelters.

In art, they depict Saint Martin de Porres in a Dominican habit with a broom, little animals at his feet as a reminder of the life of humility he led, doing humble work, his love for all of God’s creatures evident. The dove of the Holy Spirit is also present, stressing the divine wisdom Martin had. He carries a cross because of his devotion to Christ’s Passion. Since Martin was of mixed race, he is the patron of racial harmony. Because he began his life as a barber-surgeon, barbers and hairdressers claim him. He is the patron of jurists because so many important people came to him for advice. To you Saint Martin de Porres we prayerfully lift up our hearts filled with serene confidence and devotion.

Mindful of your unbounded and helpful charity to all levels of society and also of your meekness and humility of heart, we offer our petitions to you.

Pour out upon our families the precious gifts of your solicitous and generous intercession.

Show to the people of every race and color the paths of unity and of justice.

Implore from our Father in heaven the coming of His kingdom, so that through mutual benevolence in God men may increase the fruits of grace and merit the rewards of eternal life. Historical Buildings
San Martin de Porres was born illegitimate in 1579 in this beautiful preserved building in Lima that belonged to his mother a colored freed-woman f... 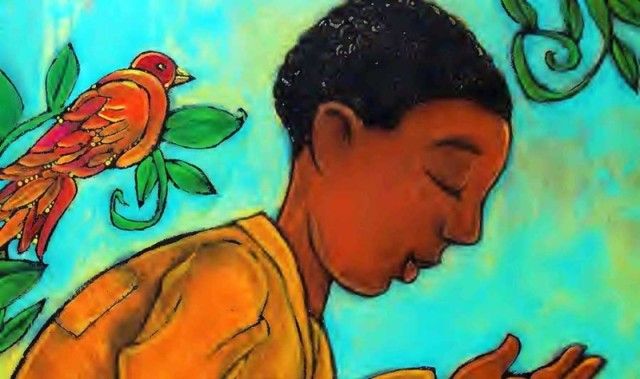 Martin de Porres – The Rose in the Desert

Peruvian Legends, Myths & Tales
Ana Velázquez hurried out of the barrios of Lima and onto the plaza. She carried a quiet baby, wrapped closely so that no one could see him - but n... The Pied Piper of Peru

Peruvian Legends, Myths & Tales
My name is Juana. For many years I lived with a colony of mice in a priory in Lima, Peru. We had a good life with the friars who lived there and fo...